The First All Electric Porshe is released: The Taycan 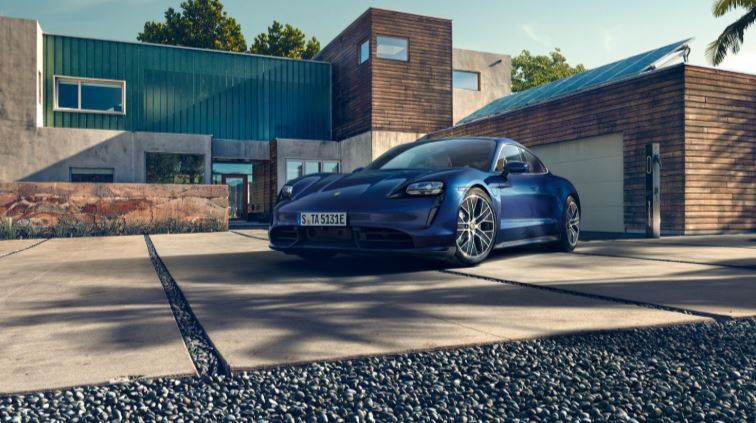 The First All-Electric Porshe is released: The Taycan

As they say in French Finalement for the release of this fully electric killer meant to battle the USA Terminator in the Tesla. This model is the first iteration that doesn't involve a flat-six or turbocharged V8 for any assistance this is the first large scale automaker from the ICE era to introduce a large-sized sedan to market, in a world where there were a slew of CUV/SUV's hitting the market (Porshe I think you should've gone with the raised version of the Taycan).  After all the white-colored photos of the Taycan, Porshe wanted this model to feel in common with the real world and blend in as usual,  here is the dark blue metallic which tells you nothing of the insides and the description nomenclature won't help you either with Porshe naming these automobiles as they have there ICE (internal combustion engines) versions with Turbo and Turbo S monikers at the end. Let's get over the semantics and small quirks, to have a focus on how special this release is for the Automotive market as the premier driving experience company attempts to make electric what it has known to have been in the naturally aspirated market ... AKA FUN AS HELL TO DRIVE.

Weight is your savior
Let me start in what hurts the Electric car outside of not making enough noise (there is some wind, and noise from a few them) it's the weight. The batteries that power these cars are not light so with all of the fun you get from an immediate surge you have the issue of not being able to corner. Porshe combats this with a list of Intelligent Mix materials to combat the Chic a Fil / Popeyes Sandwiches that batteries eat.... take a look at the infographic from Porshe

In addition to the body, they make better use of the super battery as I call it with structurally integrating it with the electric power train for safety measures as well as advancing the sportiness of the vehicle.

Chassis and Powertrain
I am wishing on a starrr. (that's a song).... The Double Wishbone axle in the front with a multilink axle with an aluminum wishbone for the rear share the wheel guidance for the vehicle. It's electric so here comes your robotic helper for road conditions in what Porshe calls the intelligent command center - 4D Chassis Control, the system analyses road conditions in 3 dimensions than calculates the vehicle status all three statuses shared through one control system give you the 4th system and the advantage of having a second eye on the road. In addition to the well known and implemented Porshe Active Suspension Management shock absorbers that come as standard, Porshe adds a single tube damper instead of a twin damper which not only makes the Porshe lighter but also offers better response between comfort and sportiness. To make sure that you're optimized for the proper speed levels Porshe integrates the Adaptive Air Suspension for optimized ride height dependant on your driving situation. Porshe Torque Vectoring plus rear axle steering makes the Porshe a much more agile steerer.  To make sure that you're not too uncomfortable with the performance active roll stabilization to prevent the roll effect as you drive.

Two motors one on the front axle and the other on the rear axle provide the electric assignment. A rarity in an electric vehicle it has two-speed transmission the 1st gear is meant for Sport and Sport Plus modes the 2nd gear enables your top speed. Hairpin winding allows for more coils and has the two motors to speak to each other and synchronize the performance. This enables the following performance numbers from the Taycan when in Sports Plus mode in the Turbo S variant.

Interior and Digital Performance with Quick Charging
Through a partnership with some other big automakers (Audi, BMW, Daimler and Ford), you will be able to access charging stations in over 400 location in Europe by the end of 2020. The aim is to reach 4,000 centers around the world to get ready for the electric car explosion. AC charging is also available at home, but the sweet spot is the 800-volt technology the performance battery has the capability of recharging 80% life in 22.5 minutes. The interior doesn't look so bad with some nice improvements already realized in the Porshe Panamera with fully touchless controls in a low sporty seating position.    In all, it is a great entrance and we shall see more to come in this new Tron era of electricity.