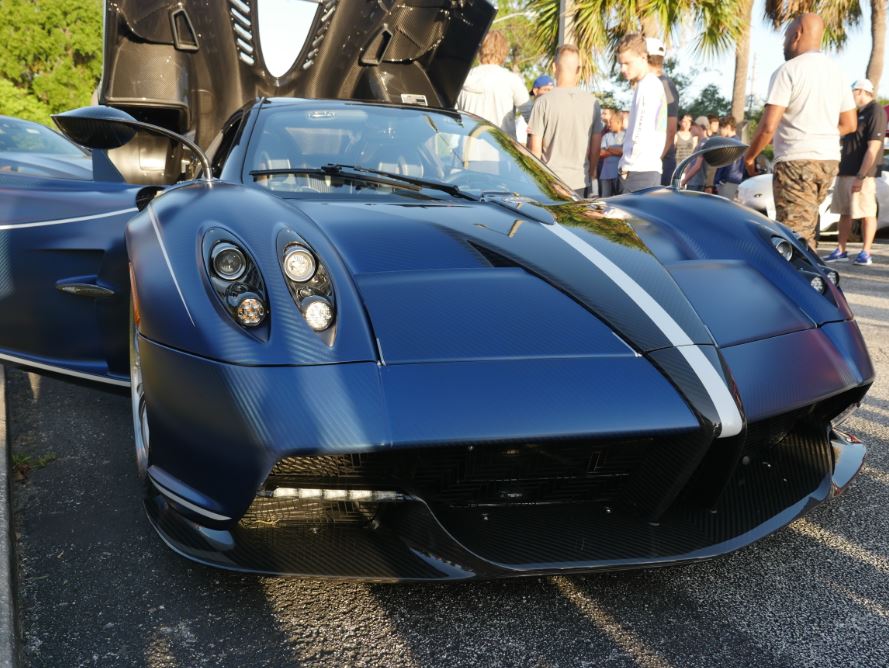 You ever get that tingling feeling that special moment when you see something special for the first time, whether it's a good pair of jeans, a beautiful significant other, that Euroforia feeling takes you and it's a moment of bliss in this tough world. Today at the cars and coffee meet up we get the 1st taste of that Italian butterfly in my heart the Pagani Huayra, understatement is not a word that can be used in this design the car immediately speaks to you of a futuristic design usually seen on Concept cars in the background of your desktop background tile. Horacio Pagani an Argentian born, Italian family background car designer is known as the Divinchi of the automotive world. His successes before the Pagani brand include the design of the Lambo Countach a masterpiece in the hall of fame of Auto design. The Huayra which was inspired by the "God of the Wind" , is the latest iteration of hidden downforce and Divinchi design.

Let's get more into the Huayra a car that has a new release that is pushing 800 HP this, however, this is the 764 HP/738 LB TQ model mated to a 7 speed sequential manual with a reverse gear. Nestled in the bay is a 6.0L V12 Twin Turbocharged hand made by Mercedes Benz AMG able to rocket the Huayra to 60 in under 3.0 seconds. When we say special this car truly is limited to 100 cars built prior to 2018. Some of the highlighted features that make this is a special car with an unofficial Nurburing time of under 7 seconds are the new aerodynamic touches that react to road surfaces with a hydraulic flap for the rear spoiler and the front end that adjusts the height to maximize the handling capacity dependant on the driving need. The side air intakes create downforce to help with a drag coefficient of .31 and .37 which makes sense in the Nurburing time but can't explain the 224 MPH top speed.

So back to the power and not the turn when you weigh under 3,000 lb's, and you have over 700+ HP special things happen with speed, and the Pagani being an RWD vehicle does quite well in putting the power to the ground. We talked about the Nurburing now let's talk about the 720 S athleticism before the 720 S athleticism catapulting the car to a 1/4 mile time in under 10.6 seconds at a 136-145 MPH. The use of Aluminum is the strongest characteristic, and the in house designed 7 Speed single-clutch transmission (because dual is lighter) help it reaches its ultimate goal hypercar stardom with quick shifts, that if it wasn't for the 325 rear tires would leave you on someone's front lawn, flipped because you wouldn't hop the curve. In all the first 720S, in my opinion, is one of the hallmarks of the automotive world, though no Nurburing times exist folks don't remember the Zonda another iteration from Horacio that broke records, Horacio is the forefather founder of Pagani and has created this Art Piece which is sure to appreciate in value in the times to come.